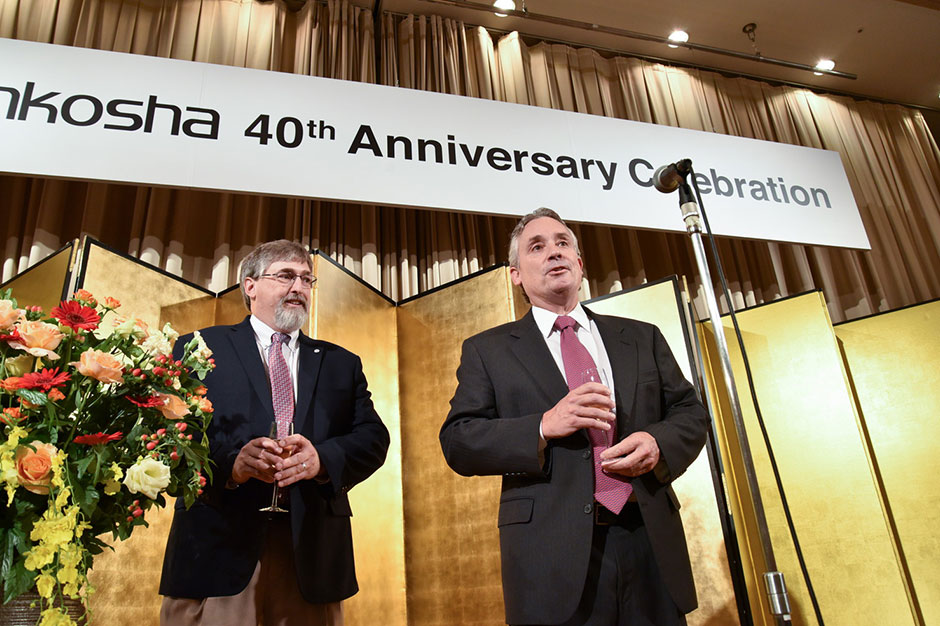 Sankosha celebrated its 40th anniversary in September with some 200 guests that included drycleaners and Sankosha dealers from around the world who were invited to Tokyo for the festivities.

They viewed Sankosha's modern facility with streamlined processing and sales functions with a tour of the factory that included a visit to the company’s history museum.

Sankosha's founder, Mitsuyuki Uchikoshi, began as a drycleaner. Always thinking of new machine ideas that could make it easier for drycleaners to operate their businesses, he eventually decided to become a manufacturer. He dreamed of marketing his innovative machines beyond Japan and expand into North America. Since he could not speak English, he decided to attend a local English school in Japan where his English teacher was Wes Nelson, native of Wisconsin who was living in Japan at the time. With Nelson's help, he partnered with dealers across the USA who could sell and service the equipment. Nelson became the first employee of Sankosha USA in 1993.

During the celebration in Japan, the company announced the appointment of Nelson as president of Sankosha USA.

In a newly decorated showroom, the latest products were displayed, giving visitors a clear overview of Sankosha's product lines for the present and beyond.

Company President Yusuke Uchikoshi in his opening speech said Sankosha is looking in to the future. "We are now proactively dealing with new product development, capital investment and in-house employee education," he told his guests.

Sankosha foresees drastic social and technological changes for the next decade, including further implementation of sensor technologies and a "cashless economy." "Sankosha will continue to build up a solid organization and will try to better serve customers with 'Trust and Fresh Wonder & Delight' through supplying products in a humble way," Uchikoshi said.

Visitors were guided in groups to the factory to witness the variety of parts production Sankosha has in its own production which provides flexibility in meeting customer demands as the product range keeps increasing.